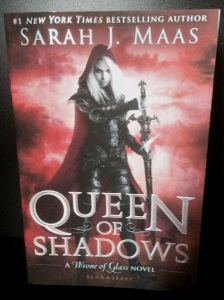 About the book: It’s the fourth novel in the Throne of Glass series. Celaena has embraced her identity as Queen of Terrasen, but she has to fight for her friends.

First impressions: I was initially surprised at the longer length of this book, especially since the others in the series so far are shorter. But it didn’t feel unnecessarily long. If anything, the story was too short for me. Also, I read the previous novel, Heir of Fire, several months ago, so I spent the first few chapters trying to remember everything that happened in the first three books. Maas did a good job piquing my interest early and holding it though.

Characters: Aelin and friends are trying to stop the good guys and gals from being injured, imprisoned, or killed. I enjoyed the characters. They have different personalities and develop in their own unique ways, not just in this book but in the series as a whole. The banter between them is fun, funny even. I like Maas’ humour.

“Stay the course, but also plot another one.”

Writing: I’m a fan of the writing. It’s descriptive enough but not too descriptive. I think the story has a good balance of action and dialogue, enough of both to keep me engaged.

Final thoughts: The ending is surprisingly satisfying. Also, I read the book during some trying times, so I found myself quite emotional. Then again, I’m invested in the characters. There are many emotional scenes in Queen of Shadows as well. I highly recommend it.

This post has affiliate links to Book Depository. If you buy through them, I earn a commission at no extra cost to you.