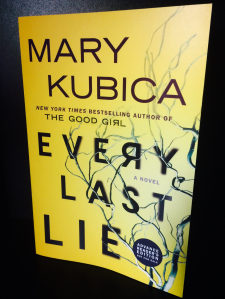 About the book: It’s a suspenseful standalone novel. Clara’s husband and daughter are in a car accident that kills Nick but Maisie is unharmed. When Maisie begins having night terrors, Clara investigates whether the crash was really an accident or if someone wanted Nick dead. She starts hunting for the truth only to discover people haven’t been entirely honest with her.

I received an advanced reader’s copy from Goodreads.

First impressions: I was excited to say the least. Even before starting the story, it seemed right up my alley. I liked the design on the front cover as well as the blurb on the back cover.

Characters: I liked Nick more than Clara, even though she’s the protagonist. I didn’t have a problem with her early on. In fact, I felt awful for Clara. However, in my opinion, she becomes more and more unlikeable as the story progresses. Her actions in the end caught me off guard but not in a good way. I get that she’s dealing with grief, yet I felt greater sympathy towards Nick who isn’t perfect by any means either. I could just relate to him a little bit better.

“My knees buckle for one quick moment, and just like that we’re eighteen years old again, wild and reckless, living only for the moment, not caring about what tomorrow may bring.”

Writing: It’s told in alternating perspectives between Nick before the crash and Clara after it. I also found myself surprised at the longer length of some sentences, especially considering the book is supposed to be a fast-paced thriller. The chapters were relatively short though. Overall, the dialogue and description worked well to establish a pace that picked up as the novel went on.

Final thoughts: I think Kubica did a fine job building up suspense. That’s why I thought the story would lead up to a bigger revelation. But it didn’t. Every Last Lie ended differently than I expected. This book isn’t your typical whodunit story. Although I can see people being spilt on the ending, I’d still recommend it if you’re a fan of mysteries or thrillers that deal with grief.

This post has affiliate links to Book Depository. If you buy through them, I earn a commission at no extra cost to you.

8 thoughts on “Every Last Lie – Mary Kubica | A Book Review”