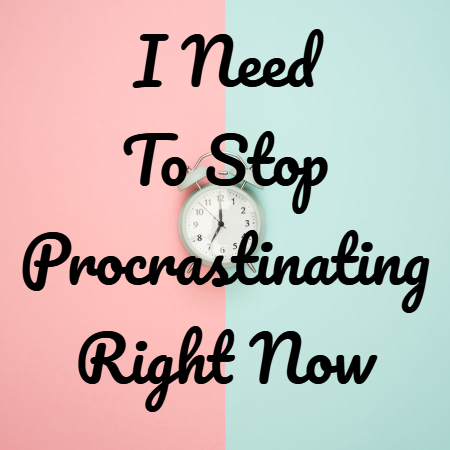 I delay. I put things off. And when the deadline nears, my stress levels skyrocket.

Even though I’m someone who hates leaving things to the last minute, I don’t always start early enough.

At least when I procrastinate, I try to be somewhat productive. Instead of doing the thing I should, I’ll do something else like clean. It’s not as urgent as an essay due in three days, but I’ll still take cleaning over writing. Or editing. Don’t even get me started on edits.

I find it interesting how much better I’ve gotten at procrastinating over the years. I guess I’ve had a lot of practice. For some reason, I didn’t put things off as much in high school. Then I went to university and everything changed.

I procrastinate with blogging all the time. I can’t help it.

When I was younger, I used to be more of a morning person, so I procrastinated less.

Nowadays, I stay up later and do most of my creative writing later in the day, which means I procrastinate until I can’t.

4 thoughts on “I Need To Stop Procrastinating Right Now”