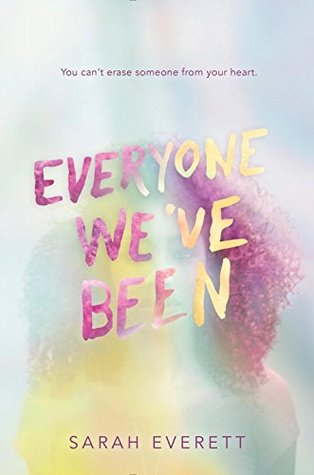 Title: Everyone We’ve Been

About the book: It’s a standalone debut novel about Addison Sullivan who starts talking to a boy only she can see after an accident.

First impressions: I love the title and cover. I’m just now realizing the latter has a person of colour on it. The premise sounded promising. I didn’t mind the beginning.

Characters: Addison is far from a perfect character. The same could be said for Zach, the boy she falls in love with. They’re more likeable at certain points and less so at others. That said, I think she redeems herself at the end and finally learns from past mistakes. Also, there’s some racial diversity with Addison being mixed race.

“You take the worst thing that’s ever happened to you and you tell it any way you want it to.”

Writing: There was more romance than I anticipated. Because I’m not the biggest fan of make-out scenes, I found the middle of the novel less interesting.

It’s told in Addison’s point of view, alternating between before and after the accident. I saw some things coming, but I liked the short chapters.

Final thoughts: I’m glad the novel ended the way it did. The story doesn’t have the happiest ending though.

I found it didn’t live up to my expectations. I would’ve liked more focus on Addison’s recovery with less emphasis on romance.

If you’re into contemporary romance with a bit of mystery mixed in, Everyone We’ve Been might be your cup of tea.