Or at least a semi-productive one.

Feel free to use what works and discard what doesn’t.

Here’s to having a productive day year. 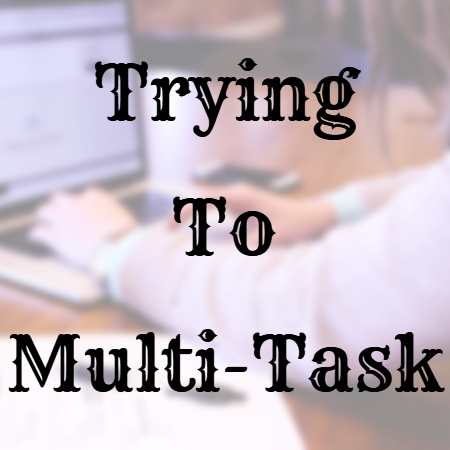 Sometimes we think it’s a good idea to multi-task, but then reality happens. And instead of being insanely productive, we don’t do things as effectively or efficiently as we’d like.

I say this as I’m multi-tasking.

I know how difficult it is to focus on one task for an extended period of time. But I think now, more than ever before, human beings need to focus, to concentrate. Easier said than done. But we aren’t doing ourselves any favours by trying to multi-task everything in life.

I realize there’s a lot going on at any given time. We have many responsibilities and obligations, interests and hobbies. Still, I see the value in focusing on one thing at a time whenever possible.

Having our attention divided, specifically when we’re doing work that requires it doesn’t do wonders for anyone.

We don’t retain as much information when we’re listening to a professor lecture while also messaging friends in addition to shopping online. We don’t write as well if we’re watching TV and talking to a friend at the same time.

I’m not perfect. But I’ve gotten better at giving important tasks my undivided attention because I can’t always afford to spilt my attention. Everything suffers when I do.

I’ve also found that each time I resist giving into temptations while in class or in the middle of a task, I reinforce the habit.

I used to be better at reading for a longer period of time without wanting to checking my phone. Nowadays, I rarely sit down for a couple of hours with a book and read uninterrupted.

I know my attention span isn’t quite like it used to be, which is a tragedy. But at least I’m aware of my flaws, some of them anyway.

I want to recognize when I shouldn’t divide my attention, when I shouldn’t multi-task. I need to resist temptations more often, especially when I’m doing work that requires critical thinking.

Of course, I’d love to hear your thoughts like whether or not you think I’m insane.