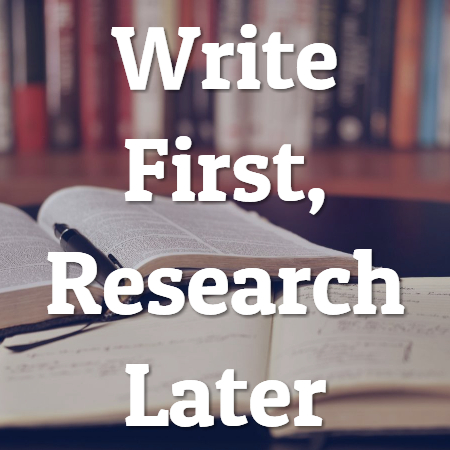 I like to write before I research. At the minimum, I brainstorm ideas I have first and look for sources later. This is how I’ve written most of my essays in university.

Even though finding research that supports my argument takes time, knowing my stance in advance stops me from researching for too long.

I’m someone who doesn’t know what I think until I write my thoughts down on paper. Only after do I have more clarity.

I’ve found the better I know what I want to say, the less time I need to conduct research. When I’m lost, I’ll spend way too much time reading articles and not enough time writing essays.

I find the sources I want to use, find the quotes I want to include, and find I’m halfway there. Besides, half the battle lies in researching.

Writing isn’t so bad once I’m in the flow state. That lovely, blissful place where words flow from your fingers onto the computer. I quite enjoy drafting a paper during the early stages.

For me at least, editing is the other half of the battle. First drafts are messy. They require a lot of time and attention to make them better.

So when the first draft reaches the final stage, I feel a sense of satisfaction. Creating something great from nothing is an achievement in and of itself.

I guess my advice to other students is to write first, research later. Come up with ideas and figure out what you’re interested in writing about. Then find evidence to support your argument.

Of course, this isn’t the only way to approach essay writing. I’m not suggesting that write first, research later is a hard and fast rule you should follow all the time.

Still, if you feel stuck at any point, have a brainstorm session without referring to any external resources.

To quote one of my old teachers, “use the gray matter between your ears.”

You can’t write about life if you aren’t living life.

With Camp NaNoWriMo approaching in 4 days, I figured I would help those of you who are participating in the way that I know best. Advice-giving via this blog.

So before you plunge into the beautifully daunting task of writing a novel, remember:

Now I know I’ve preached the above before, but it’s still a great piece of advice to follow. Even better, it applies to just about every writing project you’ll ever undertake. Besides, you can’t edit nothing. So get the words on the paper. Worry about how everything sounds after. You have thirty-one days to write. You have all the time in the world to edit. A mild exaggeration there.

Obviously, I don’t expect you to follow everything I say or preach. You aren’t a child or a dog. You’re a writer. And hopefully, soon, you’ll be a novelist.

Create something even if you don’t feel like it.

Even if you had a horrible day. Even if the day itself is considered unlucky.

You won’t regret writing, but you’ll probably regret not writing.

I used to do these tips in segments. Each segment had 25 tips but since time flew by and laziness overcame me, I figured I would resurrect my writing tips, one hundred at a time.

I do realize that writing tips number 22 and number 80 are almost exactly the same so here is an additional tip to make up for my mistake:

Fitting, isn’t it? You may be wondering if I did that on purpose. Well, I didn’t. It was a complete accident. Sorry about my previous error in judgement.

Until next time everyone! (Next time being about 100 or so days from now.)